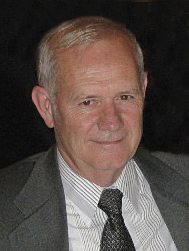 Thank you for the taking the time out of your busy schedule. On behalf of our staff and blog readers, we are very excited to learn more about your biography, your fruitful career and your most recent non-profit efforts in the numismatic community. Let’s get started.

Q: Please tell us a little bit about how you developed interest in collecting coins. Was there someone or something that initially piqued your curiosity and influenced your interest?

My interest in coins actually goes back to my very early childhood.  When I was about three years old, I was watching my mother do laundry in an old wringer-type washing machine.  The agitator had a bushing between the spindle and the agitator blade assembly.  That bushing would wear out frequently and need to be replaced.  It happened that a copper penny was just the right size and so my mother would periodically change pennies under the agitator.  When she removed the old penny that day, my mother handed it to me.  On the side that was not worn from friction I could clearly see the head of an Indian Chief.  For a three-year-old, that was an exciting discovery.  My interest in coins over nearly 70 years has always been nurtured by the thrill of discovery.

Q: You’ve had a successful 20+ year career in the military. Shortly after you retired as an Air Force Captain, you decided to pursue an Art History degree at the University of Wisconsin. What made you go into academia to study numismatics?

Like millions of veterans since WWII, I found the G.I. Bill too tempting to ignore.  There really aren’t a lot of places to study numismatics, so I was very fortunate to find an Art History professor at the UW who happened to love ancient coins.  My MA program was tailored specifically to my numismatic interests and was a unique blend of art, numismatics and connoisseurship.  That was an extraordinary piece of good luck for me.

Q: Would you recommend pursuing an academic degree for any of our collector readers that are passionate about coin history?

Archaeology departments are finally starting to awaken to the importance of numismatics, and art history has offered some opportunities for numismatists.  However, most numismatists within academia are really collectors who bring their own education and experience with them from their avocation.  It’s very hard to make a living in numismatics within the academic world.  For those who have independent incomes, academia is certainly one place to expand horizons and challenge one’s thought processes.  However, for most collectors, academia does not have a degree program that will satisfy their passion.

Q: After completing your degree, you published numerous literature volumes on ancient coins and even founded a journal. Please tell us a little bit about your creative process. How do you select a research topic and choose to pursue one avenue vs. another?

I have never consciously selected a research topic—they have always selected me.  You used the word “passion” earlier.  That is the driving force for most writing projects and it does not come through meditation or with premeditation.  A writer, more often than not, is guided by the story.  If one finds a particular event or phenomenon interesting, and follows that yellow brick road, the book, article or program will essentially write itself.  The production of a journal is much different of course than the writing of an article within that journal.  In many ways, the production of books and periodicals is an art that deals with the subliminal where writing deals with more palpable emotions.  I’ve been very fortunate to experience both ends of that continuum.

Q: Your most recent contribution to the community was founding of ACCG (Ancient Coin Collectors Guild). Please tell us a little bit more about the organization and its goals.

The ACCG is an advocacy group founded primarily to publicize and oppose the actions of cultural property nationalists who threaten the future of private collecting of ancient coins.  This is accomplished through the media, through lobbying, through litigation and through grass roots activities.  The guild is governed by an elected board of seven members from the numismatic community.  It is an active member club of the American Numismatic Association and a voting member of the International Numismatic Council.

Q: Are you seeing real progress in achieving what you’ve set out to accomplish through ACCG? What are some of the unexpected challenges that you’ve come across that you would’ve thought of back when the organization was being formed.

Progress is hard to measure in this arena.  When the guild was formed in 2004, only a few people in Washington were aware that there was an issue involving coin collectors.  Today, there are few people who do not know there is an issue.  We have enjoyed the bipartisan support of legislators, the museum community, members of the national media, even of many archaeologists.  We have succeeded in blocking adverse legislation and the rash of State Department import restrictions on ancient coins has abated.  The most important measure of progress in this area is the simple fact that the hobby is still vibrant and growing.

Q: Tell us a little bit about your personal collection. What are your “crown jewels”?

I personally collect coins with an element of mystery—mostly coins from cities lost in time.  These are rarely “crown jewels”, but many coins from my personal collection have been published in academic journals and reference works.  That in itself is a great reward.  My interests have changed many times over the years.

Q: As a lifelong numismatist, do you have a recommendation for collectors that are just getting started? How do you build a successful collection you can be proud of.

I have often written on this very question, and my answer has remained unchanged over the years.  Every meaningful collection requires focus.  Choose an area of interest where success is measurable and attainable.  Many beginning collectors of ancient coins attempt, for example, to collect a coin of each emperor.  That may be easy to imagine, but almost impossible for most people to achieve.  Conversely, focus on a single emperor can have its problems too.   As an art historian, I find the subject matter of coins intriguing and have built several collections in that vein.  The Spengler/Sayles collections of Turkoman figural bronze coins are a good example.  Those coins appealed to me because of their iconography.  They appealed to Bill Spengler because of their historical connections.  By melding our interests, we were able to produce the standard reference to coins of this era as well as an innovative analysis of their meaning and purpose.

Q: Do you have a favorite coin show / event that you attend?

Q: What’s on your mind as the next venture in numismatics?

I’m working on several projects that update older or out-of-print editions as well as a couple new studies.  I’m also working on the development of an Ancient Numismatic Research Institute where focused seminars can be held.  And, of course, I’m constantly working on the WGS web site.

Thank you again for sharing this with our readers.  Your efforts within our community are deeply appreciated.

I look forward to speaking with you again the near future.