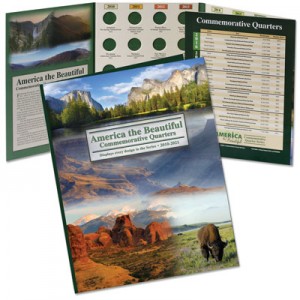 If you are a patriotically minded coin collector (and really, who isn’t?), no doubt you have begun to gather up all those remarkable America The Beautiful Quarters as a must-have component of your collection. No other coin series has ever captured, nor celebrated, the wonder and majesty of America’s National Parks like these. Their astounding popularity has added scores of new enthusiasts to the ranks of coin collectors, and all anxiously await each and every new commemorative issue.
History in The Making
For those not yet familiar with these coins, the America The Beautiful Quarters are a series of quarters created by the U.S. Mint, and were first put in circulation in 2010. The program is planned to continue until 2021, at the earliest, and could be extended to 2033, depending on the Secretary of the Treasury’s decision to extend the coin production further.. The obverse of each coin portrays George Washington, done in a reinstated edition of the original likeness used for the first-struck Washington Quarter back in 1932, which was designed by sculptor John Flanagan. Five new reverse designs are created each year, and each portray a national park or national site. There will be a selection made for each state, the District of Columbia, and each of the country’s five territories. The program was officially mandated by the America’s Beautiful National Parks Quarter Dollar Coin Act of 2008.

The Quarters will be minted illustrating the national parks and national sites in the order of which that park or site was designated as a national landmark. The quarters from the four states that represented parks or sites formerly portrayed on the State Quarters include Grand Canyon in Arizona, Yosemite in California, White Mountains in New Hampshire, and Mount Rushmore in South Dakota. The new National Park Quarters for these sites will show the same locations, but they will have newer designs. The Hot Springs National Park Quarter was the first to be issued because it was granted federal protection on April 20, 1832. The last coin to be issued, in 2021, will be the Tuskegee Airmen National Historic Site Quarter, which was established on November 6, 1998.

An Abundance of Coin Holders for National Park Quarters